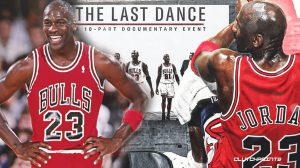 On Sunday, April 19, 2020 we were given a gift, as deprived sports fans who during this pandemic have no live sports to watch and can only stomach so many replays of games that we already know the outcome, in the form of the ESPN documentary, “The Last Dance.” The sports documentary miniseries is about the career of Michael Jordan, with particular focus on the 1997–98 Chicago Bulls season. The series features film from a crew that had an all-access pass to the Bulls during the National Basketball Association (NBA) season. ESPN and Netflix announced their joint production of the 10-part miniseries in 2018, with an official trailer released on December 24, 2019.[1]

Although we all wished the miniseries would never end, last night it did, but there are three financial lessons we can apply to our own lives that will help us in our pursuit of financial independence:

Talent is not enough– From scoring the game-winning jump shot in the 1982 NCAA Championship game against Georgetown, to being selected by consensus to the NCAA All-American First Team in both his sophomore (1983) and junior (1984) seasons. After winning the Naismith and the Wooden College Player of the Year awards in 1984, and being the third overall pick in the 1984 NBA Draft by the Chicago Bulls with all of the talent he possessed, Michael Jordan did not win his first NBA Championship until 1991. Michael even said himself in his book “I Can’t Accept Not Trying Michael Jordan on the Pursuit of Excellence,” “Talent wins games, but teamwork and intelligence win championships.”

I would argue, when it comes to having financial independence, no matter how talented you are at understanding P/E ratios of stocks, calculating the dividend yield on your stocks, reading the K-1 statements of publicly traded companies, compiling Financial Statements, debating Keynesian economic theory versus the Classic economic model is not enough.  Having the knowledge and knowing how to apply the knowledge is different.  Do not make the mistake of thinking that the “Do-It-Yourself” model is the key that unlocks the door to financial independence, it is not.  Michael Jordan learned that lesson in his first seven years in the NBA, and then he discovered the second lesson that changed everything.

Every Champion needs a Good Coach– From 1984-1989, Michael Jordan’s coaches with the Chicago Bulls centered the entire offense around MJ resulting in him becoming Rookie of the Year 1984-85, recording a playoff single-game record 63 points in Game 2 (which still stands to this day) 1986, leading the league in scoring and voted All-NBA team in 1987, NBA MVP 1988, led the league in scoring 1989 but during those years not one NBA finals appearance. But in the offseason of 1989, Phil Jackson becomes the head coach of the Chicago Bulls and now with the right coach Jordan and the Bulls win the NBA Championship three years in a row (1991-1993) and then again in (1996-1998).

It has been said, “All coaching is, is taking a player where he can’t take himself.” The talent was never the question about Jordan, but the question was will he ever win the “Big One.” The transition came, when the right coach was hired, and the right system was implemented.  May I suggest the gap between your financial talent and your financial independence is found in the right financial coach.  When you find the right person who can see the talent (assets, accounts, goals, objectives, plans) you possess and harness that talent with the right structure, system and guidance you will see a difference in your desired outcome.

The right teammates make the difference– From 1985-1990, the Chicago Bulls drafted, traded and signed players that would help support the talent they had in Michael Jordan. From Charles Oakley and John Paxson, to Scottie Pippen, Horace Grant, Craig Hodges and Bill Cartwright, the Bulls were intentional in selecting the right teammates needed to build a Championship caliber team around the greatest player and coach ever.

Your financial independence is hinging on you selecting the right team to help you win in achieving your Financial goals.  Every successful financial team consists of a Retirement Income Planner, an Investment advisor, an independent Insurance expert, a Certified Public Accountant and an Estate Planning Attorney. These five team members will help take the talent your possess, coupled with the right financial coach leading the team to achieving your financial goals.

If you would like to learn more about how to implement these three financial lessons please reach out to us at www.rollovercompany.com or call our office at 615-678-6603.