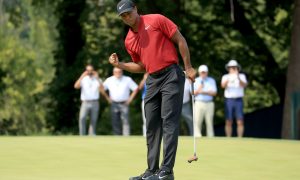 Golf enthusiasts or fans of Tiger Woods, which I am part of the latter, are excited that it seems the Tiger Woods of 2008 is back.  Why 2008? 2008 was the last year that Tiger Woods won a major Golf Championship (U.S. Open at Torrey Pines Golf Course on June 16, 2008). Not only are golf enthusiasts and Tiger fans excited, but CBS and their advertisers are excited because professional golf ratings are much higher when Tiger is in the hunt on Sundays than Sundays when he is not playing in the final round.  So this past weekend was really exciting to watch, as Tiger came in second place in the PGA Championship in St. Louis, MO. In fact, if a few puts had rolled slightly to the right he could have been the 2018 winner of the 100th PGA Championship.  As I watched the PGA Championship this weekend, I believe Tigers Wood’s performance gives us three lessons on Retirement Planning.

These are the three lessons we can learn from Tiger Woods and his play during the 100th PGA Championship 1) It’s never too late 2) Do not quit 3) You need a “Retirement Income Caddie. Let us help you win at this financial game called Retirement.